A Word on Bullying 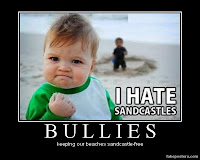 I know this topic has already become old, but I thought I'd atleast give my thoughts on the subject: bullying in Eve Online.
There has been a recent uproar following The Mittani's actions at Fanfest. The way I see it the responses can be classified in three groups: those that feel his actions where outrageous and CCP was way too light on him with the month ban, those that feel CCP can stuff their ban, because it turned him into a martyr, enhancing his credit as the "villain" in Eve, and finally those that don't really care about the politics of a science fiction game and just try to enjoy it regardless. I believe I happen to fall in the latter.
When I was in preschool my teacher taught me a simple technique to bullies:
"Just ignore them, they want the attention."
True enough that this advice did little when my head was being stuffed into a toilet (don't worry I'm not going into a therapy session here, just bear with me). I have, however, found the advice useful in online gaming. From the trolls in roleplayers to the douches in first person shooters.
So far, in my short stint in Eve, I have come across all kinds of people, but generally I find that most people act reasonably. Every 1v1 request has been honored so far, even with accompanying gl's and gf's, and the few smacktalkers in local I just ignore.

Although I will agree that you should not be completely ignorant. Eve online has one of the most complicated political system in any game I have ever played, and just as in real life, you should atleast keep an eye on the happenings so that you cannot say "but, I didn't know it was Hulkageddon!!" CCP was even kind enough to add a warning for the Burn Jita event in the log in screen (see above). Just a reminder, your playing a game where trust is a precious commodity- spend it wisely.
Posted by Eon Themistocles at 15:41 1 comment:

Close but no cigar

I woke up early and figured I'd log in before starting my day. I quickly grab a Rifter and jumping into Amamake I see another Rifter on my directional at one of the belts. I warp in and get into orbit around him awaiting the barrage of projectile ammo that usually follows, but nothing happens.

He is 0.1 security status so I can't engage per Uni rules, so we just look at each other for 30seconds.

I convo him and explain he'll have to engage first- he is more than happy to oblige. He starts eating away at my shields and I return with scram and webs, but only a couple seconds later realize I missed activating my guns. Halfway through my shields I start putting the hurt on him.

Surprisingly though I catch up! We both break armor around the same time. Halfway through armor I see he is taking the lead and start hoping my damage control unit is enough to keep me in the game. Stupidly enough I only realize then that because I was using orbit and he was approaching, our angular was pretty much zero, allowing him to put full damage on me. My DCU1 just couldn't keep up.

My main tactic was to kite him with barrage ammo and keep him at range with my point and web, that tactic worked for the first half of the fight, but looking at the replay I believe he switched to long range ammo which turned the fight into a numbers game- and he just had bigger numbers than me (ladies?).
Posted by Eon Themistocles at 08:00 No comments:

In the vast universe of Eve Online thousands of pilots pit themselves against each other in battles, exchanging bullets, lazor beams, missiles and pod fluid in a glorious show of pure destruction or so I was lead to believe.

I have a deep appreciation of all kinds of games (a.k.a. gameaholic) from role-playing games to first person shooters and now I've set my sights on one of the most confusing games I've ever played -Eve Online.

My name is Eon Themistocles and this is the story of me trying to figure this game out one step at a time, and hopefully taking some names along the way.

In the posts to follow I will possibly upload any ideas, tactics, stories and videos of me trying to become a half competent pilot.

Between you and me- it's gonna take a while.

I will always be open to any comments or suggestions, so troll away.

As a taste of what's to come I made this short video mostly of me just getting blown up (you have to start somewhere, right?). Enjoy!

Posted by Eon Themistocles at 07:09 No comments: